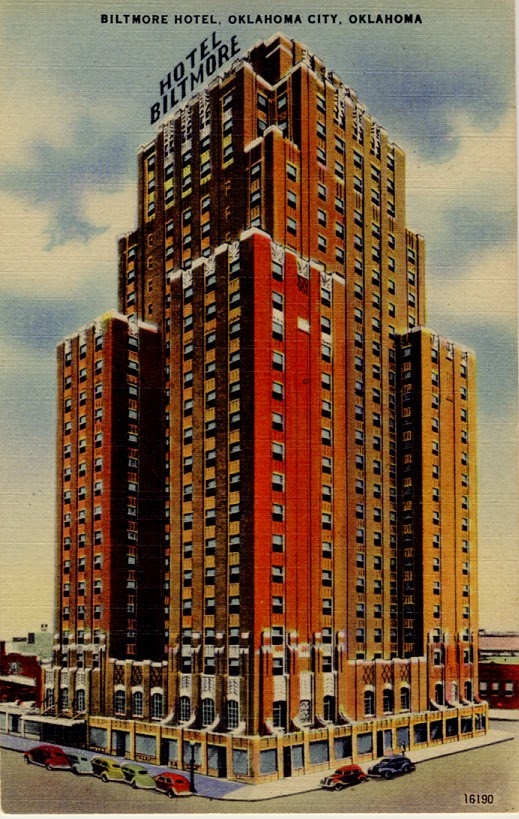 The Hotel Biltmore, formerly of Oklahoma City, OK, was built in 1932 at a cost of $4 million.  At the time, it was the tallest building in Oklahoma, standing at 33 stories.  An architectural achievement for its time, the art deco tower had over 600 rooms, 7 elevators, 5 telephone operators, 3 radio channels in every room, and its own ice plant producing 100 tons of ice daily.   The hotel was renovated in the 1960's, at a cost of $3 million, and renamed the Sheraton-Oklahoma, but its days were numbered.

Shortly after that, as in many urban centers, "white flight" began an out-migration to the suburbs, and the answer for fixing the city center was "urban renewal."  In Oklahoma City, big plans were made, with contributions by architect I.M. Pei, to rebuild a vast swath of downtown, creating a massive shopping mall called the "Galleria" and adding a huge convention center.  The idealistic plan (with a cool 1960's orchestral soundtrack) can be seen in a documentary on YouTube, consisting of Part 1 and Part 2.   If you hate what urban renewal did in many cities, you will love hating this video!  The film says "Like many cities, Oklahoma City is showing a disease called blight, which like a deadly mold is settling over downtown and killing it."  The answer?  Tear it all down!!

And that includes the Hotel Biltmore.  Originally, it was included in the new plan, and you can see it in the video Part 1 at 4:16.    But the Hotel, like other downtown businesses, started to fail financially, so it was thrown into the mix of tear downs. 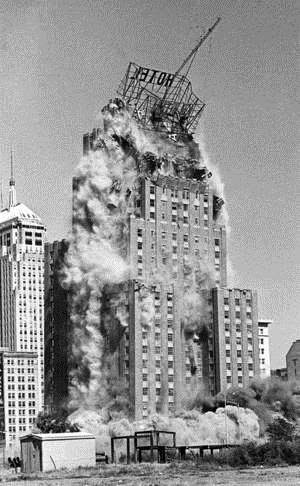 Photo by PAUL B. SOUTHERLAND, the oklahoman archive

At the time of the demolition, in 1977,  it was the tallest steel-reinforced building in the world ever demolished with explosives. Nine hundred explosive charges were used in the building to bring it down.  After everything was demolished and torn down, few of the promises were kept, and only the parking garage for the "Galleria" was built, along with a large park called the Myriad Gardens.  Stagnation was the rule through the eighties and into the nineties, but after that improvements began to pick up, and things are in much better shape today, even with a recovery from the Timothy McVeigh bombing in 1995.  However, the old Hotel Biltmore is gone.  Although it's a story of Oklahoma City, maybe it's not "OK."

I always think it's a shame when they demolish buildings which were so representative of a style.