Here's the Church, Here's The Steeple

Some postcards have great messages on them, and the messages contain great mysteries.  The subject of this mystery is this card of Lewiston, Maine.  It's postmarked 1909, and it's mailed to Miss Helen Libby of Biddeford.  The message on the front is written by a man who worked on the steeple of the church in the picture.  The text reads: "I help build this steeple over last fall, way to the top of it.  Where the x is is the shop where I work."   You can see an "x" on a low brick building a few streets behind the church.   Additionally, the church steeple is marked with an "x" and labelled "180 ft."

The mystery?  What church is this, is it still there, and does it have an interesting history?  That's what I set out to discover. 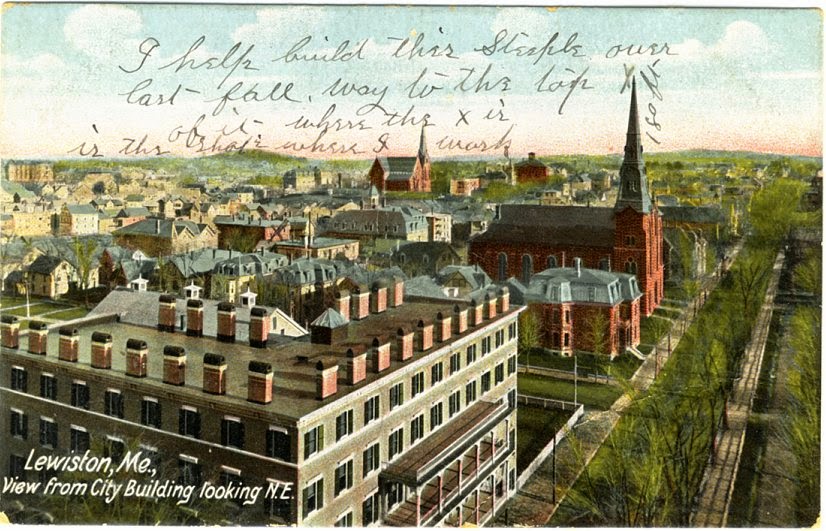 The first order of business is to locate the church.  There's no church that looks exactly like it using Google Earth, so maybe it no longer exists?  A clue to its location is the light colored building in the foreground.  I have other postcards of Lewiston, so I took a look and found several of a building with suspiciously similar porticos, and the same number of windows per floor between the cards.  This is the newest one, postmarked in 1960: 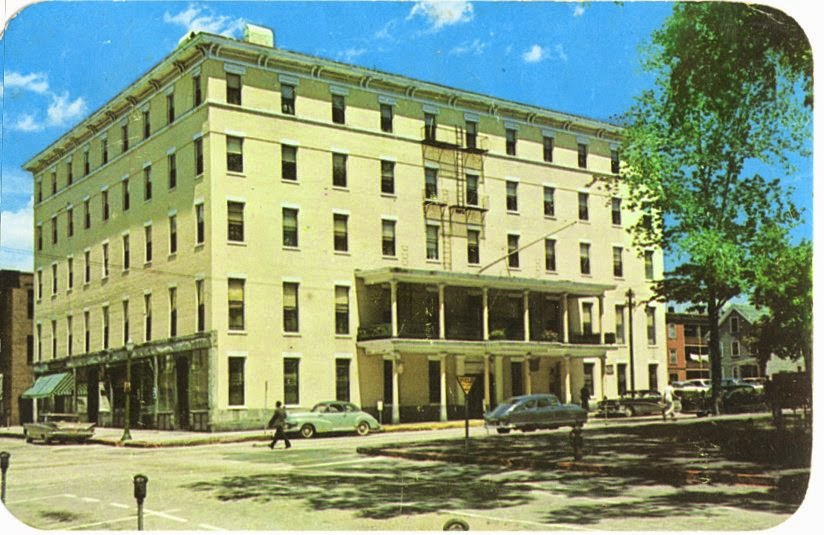 Although the chimneys seem to be gone, and there's a new cornice, these cards are of the same building.  And the building according to these cards is the DeWitt Hotel.  The chrome version above gives the address as 40 Pine Street.  Great, now all I have to do is go back to Google Earth and take a look at that address today.  And the answer is:  no DeWitt Hotel building and no Church on Pine Street:

So, what church was it, and what happened to it?  More internet research turned up interesting additional clues, and now that I had the street, I quickly discovered that it was the Pine St. Congregational Church.  It was built in 1866.  I also found this photograph below, which was captioned  "Maintenance on the Pine St Church Steeple," but I think this is earlier than 1909, because the building closer to us in this photograph looks older than the one with the mansard roof in the postcard above.  Another mystery for another day (or else I'll never complete this post)! 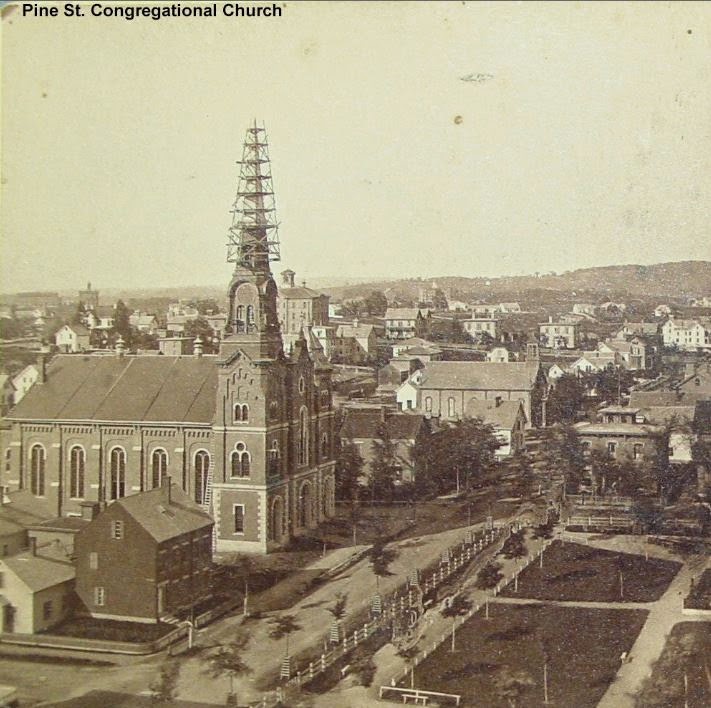 OK, when did the Pine St. Congregational Church disappear, and why?  After a lot more searching, I found the following one sentence in the "City Locals" section of the Lewiston Evening Journal, July 11, 1940.  Between an item about a city clerk testifying in a court case and an item about Mrs. Gauvin recuperating from an illness and now "out of danger," is our clue: "The Hub Wrecking Co. of Boston began yesterday the razing of the 75 year old Pine Street Congregational Church.  A First National Stores super market will be erected on the site." 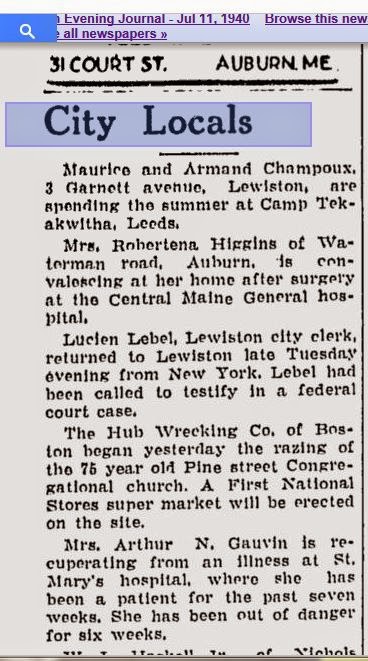 The following day, the newspaper had this picture, but no other explanation.  The workmen were demolishing the very structure that our postcard sender helped to maintain over 30 years earlier. 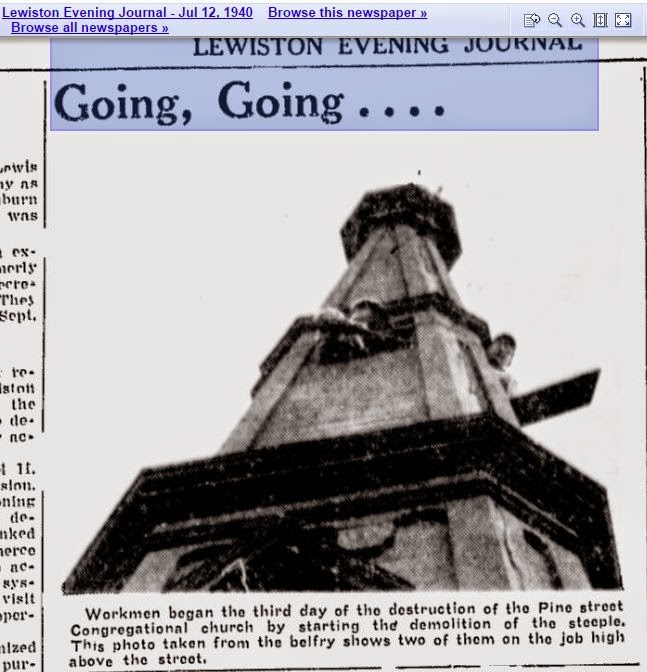 In the Fall of 1940, the other shoe dropped with a full page ad in the newspaper announcing the opening of the new store: 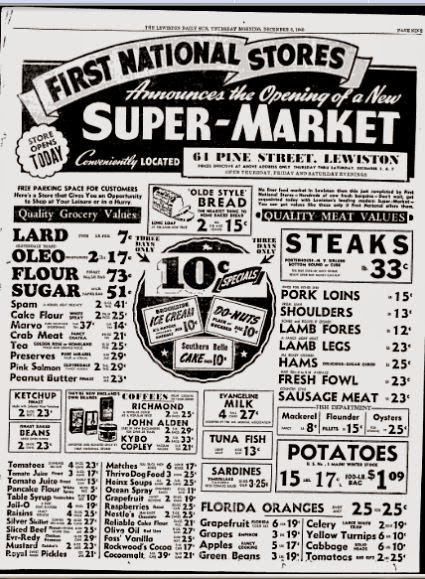 More research uncovered several other facts about this address and the demise of the church.  A good source for church history, believe it or not, is information about the organs in churches, many of which are documented in several databases.  I learned the reason for the abandonment of the Pine St. Church building from one such database, here: http://www.quimbypipeorgans.com/completed/rebuilt/st-john-s-episcopal-church-2006.  It turns out that the reason for the demolition of the church was due to the merger of the church with the Universalist Church in town, becoming the Federated Church of Lewiston in a different location.

As for the organ, it was an E. & G. G. Hook, model Opus 326, installed in the church in 1866 and then electrified in 1923.  The website database.organsociety.org notes that the organ was saved and sold for $850 to a church in Biddeford, ME.  Now, it's in Quincy, Illinois. There will be a quiz.

The story of this location does not end with the First National Super Market.  In 1958, they built a new one a half mile away, knocking down additional buildings to have parking for 200 cars.  And the old location?  Now, it's a very banal brick building, used by a youth social services agency, but with a "for lease" sign in the window.


Progress?  You be the judge!  Here's my attempt, through the magic of photoshop, to re-insert the old church over the current landscape, with the steeple proudly worked on by an anonymous postcard sender of 1909:

Email ThisBlogThis!Share to TwitterShare to FacebookShare to Pinterest
Labels: Architecture, Great messages, Maine, Then and Now

WOW! I LOVE this post--I am a sucker for mysteries and this post is just fascinating. Thank you for joining us for Postcard Friendship Friday. I enjoyed this post so much! :D Have a great weekend.