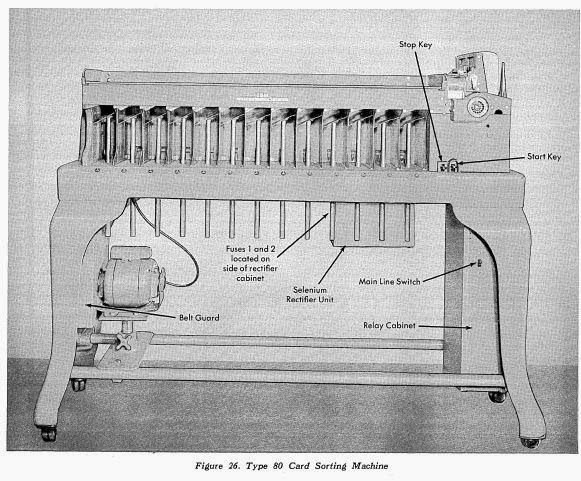 Let's look in on the Statistical Department at the National Grange Mutual Liability and Fire Insurance Company.  Their office was in Keene, New Hampshire, and this card is from the 1930's or 40's.  These ladies are doing a fine job of data processing, with the assistance of a state of the art card sorting machine, which is probably an IBM Type 80 card sorter.  The purpose of this machine was to take a stack of what were once called "Hollerith cards," then called "IBM cards," and now called "antique bookmarks" and sort them into alphabetical or numerical order based on the holes punched in them.  The photograph above  is from the actual operator's manual from IBM.

In retrospect, the amazing thing about this machine is that it was entirely mechanical, but still could run through 450 cards per minute.  There were no transistors, no tubes, no circuit boards, no silicon -- just good old wheels, gears, brushes, levers, and a big 'ol motor that is visible on the bottom left side of the machine.  If you wanted to sort a stack of cards into order, and they had, let's say, a 5 digit number punched on them, you had to run the whole thing through the machine 5 times, once for each digit.  If you dropped some cards or messed up half way through, you had to start all over again.  That's all the machine did. It didn't punch the holes in the cards, it didn't add them up k-- it just sorted them.

Well into the 1980's stand alone card sorters (later models, of course) were still in use in computer centers everywhere, sorting checks, cards, deposit slips and more.  I got to run one while working in a computer center during the summer of 1979.  It was noisy, generated lots of dust, and every once in a while it sprayed the cards all over the place.  Old school computing at its best!
Posted by Max at 9:21 PM

Things sure have changed, haven't they? I'm glad some of us still remember the way it was. I miss you for Postcard Friendship Friday! HOpe all is well.

Hi Beth, Thanks for the comment. I have been really busy lately, but I'm still around! I hope to get back to the blog soon -- I'll set a goal of getting an entry in for tomorrow's Friendship Friday -- how's that?