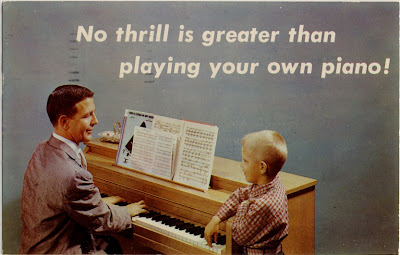 DO YOU KNOW WHY
a piano is such a wonderful musical possession, acknowledged the world over to be the "basic musical instrument"?

It is because piano music enriches the lives of both player and listener -- and because the piano is an instrument that most people will play throughout their lifetimes.

Please call and let us make an appointment to talk this over with you. We know we can work out all the details.

And the following notation was handwritten in:

"Our exciting sales are still on and also we have a special on an Ebony used Acrosonic spinet."

The card is postmarked 1958, when all across the suburbs living rooms were filling up with pianos so the baby boomers could take lessons. The spinets, which are the shortest type of vertical pianos, like the one in the image, were the bottom of the barrel when it came to quality. They had poor tone, generally were cheaply constructed and were notoriously hard to service. Nevertheless, they were a part of many of our childhoods, in part due to the successful marketing campaigns of those times.

Corny as these postcard ads were (I'll post more later), there's some truth in my case. I still play the piano almost every day, often just for ten minutes, but it's rooted in a Danish Modern style Story & Clark spinet that found its way into the living room of my childhood home, in a subdivision built in the 'burbs in the early 60's!

I love advertising postcards like that. I never had piano lessons. It's a good thing because I am not musical.

These ad postcards slay me -- so earnest in their pitch!

I refused to have piano lessons, and of course I regret it now. Both my sons had lessons but in all honesty I don't believe they ever play now. At least they have the opportunity.

I had piano lessons but hated practicing. The man who came to our house to lessons to my sister and me looked like Ed Wynne from Mary Poppins. He was a strange little man, as I recall. I'm certain he rightly realized I had no talent at all!

Great card! My father bought a player piano so I could have lessons when I was in 6th grade. I never could play as well as the music from a piano roll!

Hmm. I wonder if I can still get a deal on that spinet.

Interesting ideas, I suppose the cost of the piano justifies playing it for the rest of your life.

Wonderful advertising postcard... truth to what you say about the 50's and pianos.... thanks for stopping by.. .PFF

Wonderful postcard and information about the piano great family time together.