The First Day of the NYC Subway 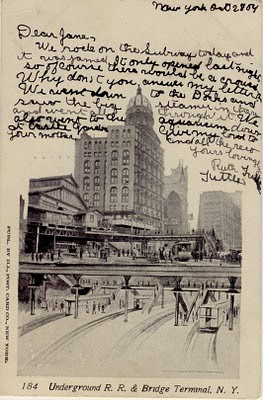 An outstanding handwritten message on this postcard. The New York City subway system opened on October 27, 1904, and Ruth wrote to her friend Jane about riding on it the very next day. The text reads, "We rode on the subway today and it was jam(m)ed. It only opened last night, so of course there would be a crowd." She goes on to say, "Why don't you answer my letters? We went down to the Docks and saw the big steamer in there and went all through it. We also went to the aquarium down at Castle Garden. Give my love to your mother and all the rest. Yours, lovingly." The postmark on the other side is October 29th, 1904.

We don't know Ruth, but we can imagine how excited she was about the new subway! Read more about opening day here: http://www.nycsubway.org/articles/dayone_index.html

Subways and streetcars...you hit on my weak spot. Love this card!

That is a great message.

Likely she's not getting letters back because the other is jealous Ruth got to ride the subway before her.

Ruth wrote her message nicely along the buildings on the photo. The result, the combination of the picture and the text, is wonderful. I thought Ruth' sudden question about the non-answers of her friend was heartbreaking. Happy PFF.

wow, is this special. I first began collecting NYC postcards years ago. This is great!

Great card and I love the message! Happy PFF

How fun! But if it had been me, I would have waited for the crowds to dissipate and to make sure it actually worked!!

One to treasure! How exciting to have one that marks a moment in history in this way.

I browsed through all the cards you've posted and just love your choices of vintage places and times. Streetcars! Love it!