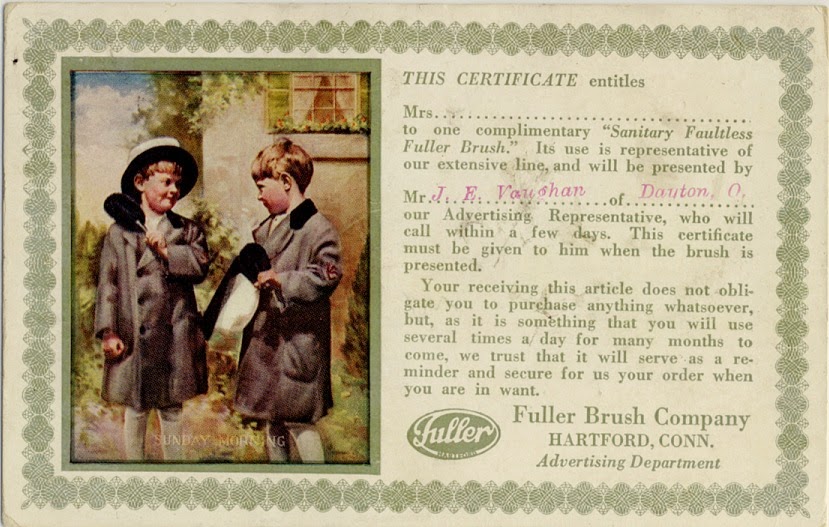 The Fuller Brush Company was started by Alfred Fuller in 1906.  One of Hartford, Connecticut's most iconic historical companies, Fuller Brush became well known not only for its products, but for its door-to-door sales force. In its first years, it sold 32 types of brushes, mops and brooms locally, but in 1909 it went national when a classified ad looking for salesmen yielded 260 dealers. Working on commission only, these men walked an average of six miles a day. According to archival documents from the Fuller Brush Company, seven out of ten recruits failed in the first three months.

The postcard from my collection above was apparently sent to potential customers in advance of a visit from a salesperson.  It is a "certificate" for a free brush, to be redeemed with the salesman, without obligation to buy anything else.  Click on the image for a larger version, or read the text of the card here:

THIS CERTIFICATE entitles Mrs. ______ to one complimentary "Sanitary Faultless Fuller Brush."  Its use is representative of our extensive line and will be presented by Mr. J. E. Vaughan of Dayton, O.  our Advertising Representative, who will call within a few days.  This certificate must be given to him when the brush is presented.
Your receiving this article does not obligate you to purchase anything whatsoever, but, as it is something that you will use several times a day for many months to come, we trust that it will serve as a reminder and secure for us your order when you are in want.

Great early marketing!  As time went on, the company focused on manufacturing items for WWII, before returning to domestic items.  From there it continued to grow and become so well known that it was even featured in a gag in Walt Disney's Three Little Pigs, when the wolf disguised himself as a Fuller Brush Man.

Today, the company is no longer in Connecticut, having gone through several buyouts and iterations including becoming part of the Sara Lee conglomerate, now operating out of a facility in Kansas.  Luckily for us, however, the early days of marketing are well-documented on postcards which document the roots of early 20th century businesses and their activities.


- Source of some of the above information and place to see more about the Fuller Brush Company: http://connecticuthistory.org/hartfords-fuller-brush-company-goes-door-to-door-across-us/#sthash.gMSvgHGn.dpuf.
Posted by Max at 11:47 AM

So nice of your article. Its well defined and informative. I will definitely visit your blog again. Thanks -
Happy New Year WhatsApp Messages 2020