MacArthur Causeway, Then and Now 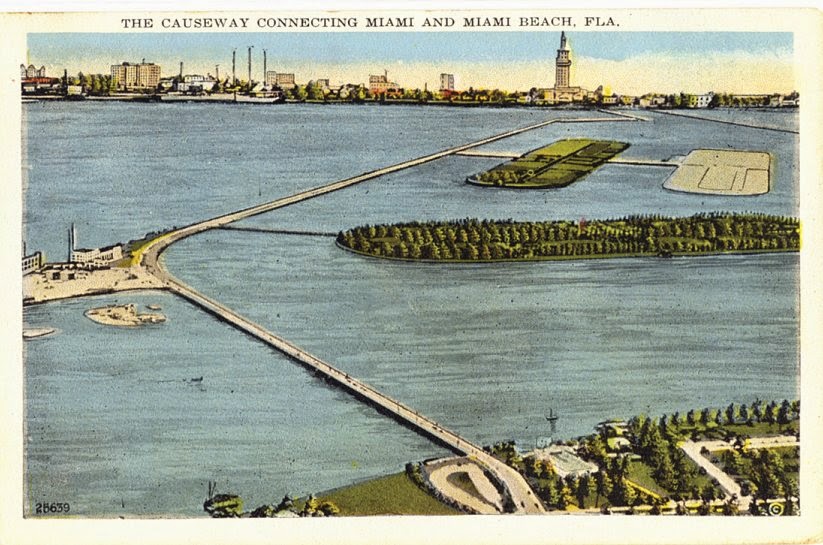 The white border postcard above shows the MacArthur Causeway connecting Miami and Miami Beach, in its early days.  Construction on the causeway started in 1917 and was finished in 1920.  It was originally called the "County Causeway" and it was built to replace a deteriorating wooden bridge to the north which has since become the Venetian Causeway.

One of the mysteries of old postcards is determining when they were actually published.  In this case, it's a "white border" postcard, and those were published between 1915 and 1930.  Since we know that the causeway was finished in 1920, that narrows down the card to 1920-1930.  Another clue can be found by comparing the postcard to today's Google Earth view from the same vantage point, which can be seen below.  At the far end of the causeway there is an additional island now that is not in the original view.  This is Watson Island, which was build from reclaimed land surrounding the western end of the roadway.  Watson Island was completed in 1926, so now we know that the postcard dates between 1920 to 1926. It's interesting to see all the development that has taken place since the 20's.  The residential islands to the "right" (really the north) of the causeway are completely developed with high end homes, and there are additional islands built on the other side.  You can also see the significant high rise developments all the way up and down the coast (in the foreground).

All in all, I'd rather be there today than in New England, where the high temperature for today in my Connecticut town is supposed to be 14 degrees!
Posted by Max at 11:20 AM

Email ThisBlogThis!Share to TwitterShare to FacebookShare to Pinterest
Labels: Bridges, Florida, Then and Now