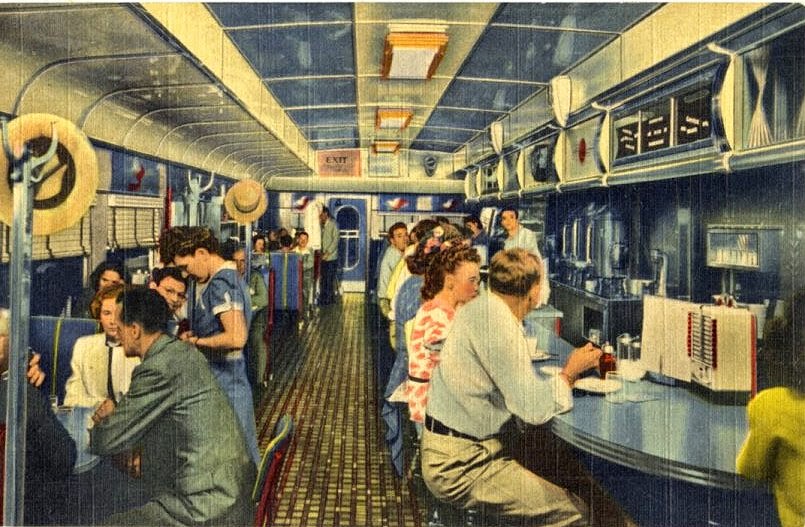 This is one of my favorite diner postcards, as it shows the employees and customers in a relatively natural unposed scene.  It's a linen card of the the Willow Grove Diner, when it was in Willow Grove, Pennsylvania.  It was at the intersection of Routes 611 and 263, a site now occupied by a Burger King.  According to the current owners, the diner was built in 1948 by the Fodero Dining Car Company and operated there until the early 1960's.  In 1963, new owners moved it to a vacant lot in New Jersey, but never re-opened it.

In 1996, a new owner came along -- a diner aficionado with a vision -- and he disassembled it piece by piece and shipped it to Bainbridge Island, Washington, a mere 2,800 miles away.  Re-opened as the Blue Water Diner, it was visited by Guy Fieri from the Food Network.  Since then, it has been also named the Big Star Diner and the Madison Diner, and its current owners continue to operate it in a spirit consistent with its long history and even longer journey.

Here's a shot of the exterior in its current location:

Email ThisBlogThis!Share to TwitterShare to FacebookShare to Pinterest
Labels: Diners, PA, Restaurants, Then and Now, WA

Wonderful! When I looked at your header I recognized immediately the Expo '67 postcard. I have fond memories of this, I was 11 years old when it took place here in Montreal, Canada. You have a great blog.

Linda, I was there too, in 1968 at the age of 9. It was mesmerizing, and thankfully postcards have documented the entire fair in retrospect! Thanks for the comments!