Happy Thanksgiving to my followers!

At the first Thanksgiving, legend has it that lobster played a prominent role on the menu, prepared by the Native Americans and introduced to the pilgrims.  So, it's fitting that today's post features some restaurants that feature lobster on their menus.  Where shall we dine this Thursday?


This card is of the Lobster House, in Allendale, South Carolina. 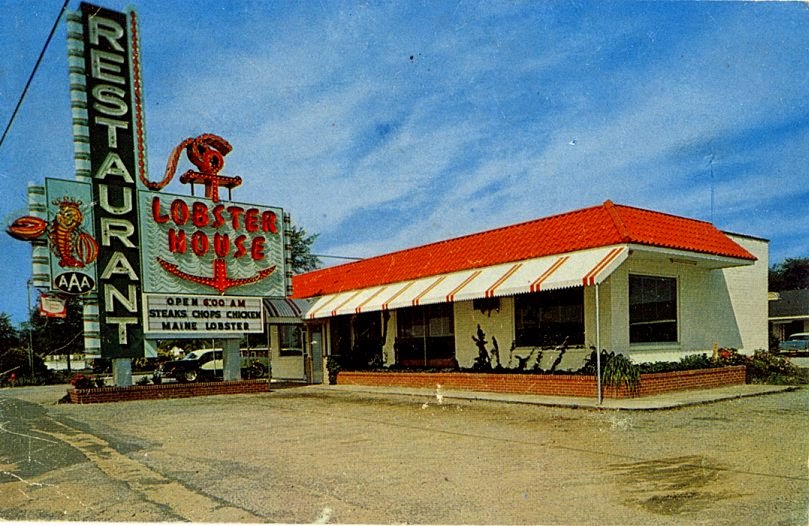 The back of the card says, "A Year 'Round Restaurant of Distinction.  Air-Conditioned.  You can always depend on really good food and service."  Except, I don't think that advice holds true any longer, judging by the current street view in Google Maps!

I guess we'll have to move on.  Let's try Eugene's Sea Food restaurant in the Hotel Juneau in Milwaukee, Wisconsin.  They feature lobster prominently on their menu, and, according to the back of the card, it sounds like a great place: "Downtown overlooking the Lake.  Beautiful Juneau Park, Elks Club and one-half block from C. & N. W. Depot.  Rates with bath $1.75 and up; without bath less.  Convenient parking space.  Famous for sea food.  No larger variety anywhere.  Air conditioned dining rooms. Coffee Shop, Tavern and Lobby.  Recommended by Duncan Hines." 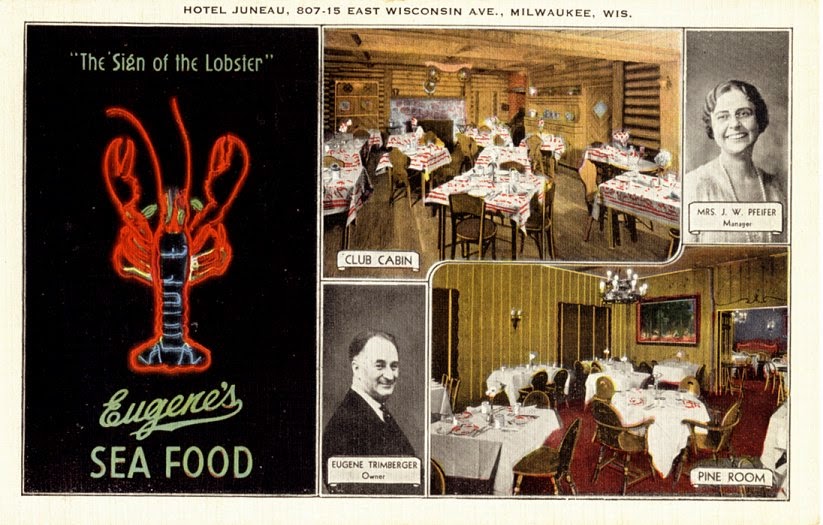 Well, Eugene's is out as well.  Mr. Eugene Trimberger sold the hotel in 1948 to another operater, and then it was razed in 1964 to make room for a new building.

Are we out of luck?  We'll have to try Boone's Restaurant, in Portland, Maine.  Originally opened in 1898, Boone's was the originator of baked stuffed lobster.  Here's a great linen advertising card, featuring an over-sized crustacean and an anxious diner... 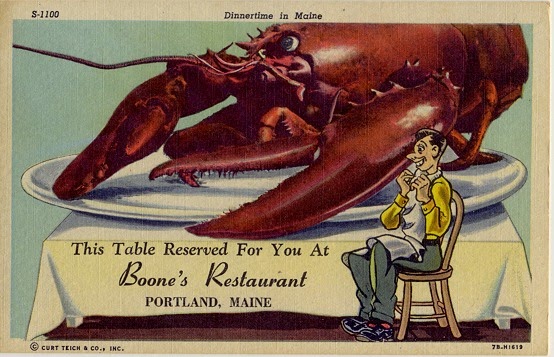 Recently renovated, Boone's is still going strong, over 100 years old.  So, have a happy thanksgiving, and now we know where to meet for some traditional Thanksgiving food!!