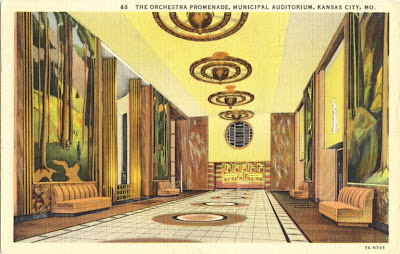 The Kansas City Municipal Auditorium was one of the buildings built in 1934 as part of a "Ten Year Plan" championed by various local politicians including Harry S. Truman and Thomas Pendergast. Other buildings in the plan included the Kansas City City Hall and the Kansas City branch of the Jackson County Courthouse.

The streamline moderne architecture was designed by the lead architectural firm of Gentry, Voskamp & Neville to appeal to new visitors with cool and confident restraint. True to its name, the style promised to envelop the visitor in modernity, assuring him/her that Kansas City was a rising star in the country, a place to recommend to friends and colleagues. When the building opened in 1935, it was called by the Architectural Record "one of the 10 best buildings of the world that year" In 2000, the Princeton Architectural Press called it one of the 500 most important architectural works in the United States
The Auditorium is now part of the Kansas City Convention Center, but I don't know if this beautiful lobby survives. Can any locals help us out?

I do hope it does survive - it is a wonderful example of the times.

that looks SO mid 1930's. Fred Astair and ginger Rogers could dance through there.

I feel like being drawn into the card because of all the circles :p

What a lovely place. I hope it is still there. It would be fun to see a picture of the *now*. Happy PFF.