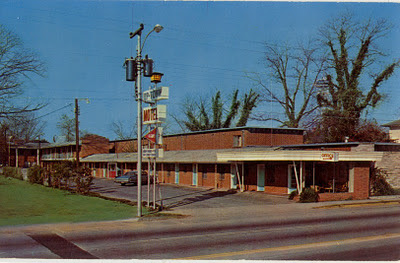 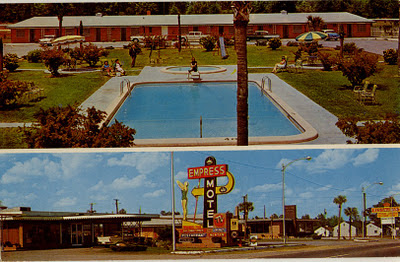 Last's week's entry, in anticipation of the South Carolina debate featured linen postcards of places that I don't think exist any more. So, this week, we're moving into the chromes, with maybe some more luck of finding a restful night's sleep after the all the Republi-fuss.

Your first choice is the Sexton Upton Motel in Florence, SC:

Not for you? Then check out the Empress Motel, Allendale, South Carolina, with the awesome signage out front. And the awesome Empresses out back lounging by the pool. Whose that guy in the suit in the background? The Emperor, perhaps??

That first motel does not have attractvie architecture! These cards are like a time capsule of their era.

Hi there--I love these postcards--I especially love the linen effect they have.

Thank you for sharing, and for taking part in PFF! (grin) It's a privilege to visit.

I can remember staying in a motel much like this. Traveling in a car with no air conditioning in the heat of summer. Memories! Fun cards. Happy PFF

You aren't going to miss the Empress, are you? It does serve its purpose.