In memory of the Seaside Heights amusements on the New Jersey shore, here's a postcard of the "Flying Cages," one of the most popular, but relatively short-lived rides through the 70's.  They were operated by the riders' own momentum and physical exertion, rocking the cars until they swung over the top.  See a demonstration video on YouTube.

Also known as "The Swingin’ Gym," these contraptions were lots of fun but injured many riders.  Due to their uninsurability, they largely disappeared within a few years of their operation.

The one in the card above was, according to the back, "Just one of dozens of thrilling rides on the fabulous Casino Pier," which was at Seaside Heights.  I'm pretty sure it had been replaced by other rides and was not there last Monday when Hurricane Sandy hit, but here's what the pier looks like now... 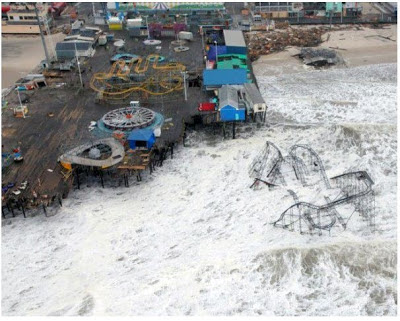 My sympathy to those who lost loved ones or property in the storm, but to those as well who cherish childhood memories of amusement parks like this one and can now never go back.﻿
Posted by Max at 8:37 PM

I have never experienced the seaside amusements. seems I missed the boat on that activity.
the devastation is shocking.

Well...even if it isn't really safe...I think I might have liked to try the swinging cage ride! ;)

My thoughts and cares are with those affected by Storm Sandy!