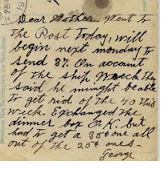 The front of this week's postcard is a view of the Bridge and Pond in Elizabeth Park, in Hartford, Connecticut.  It's a few miles from my house, and the park has an outstanding rose garden which is one of the world's largest.  The postcard is postmarked April 17th, 1912.  The date is important!  Why?  Three days earlier, on April 14th,  the Titanic sank en route to New York, on her maiden voyage.

The back of the card is a whole lot more interesting, because it refers to the wreck of the Titanic, without actually mentioning it by name.  It says:

Dear Mother, Went to the Post today, will begin next Monday to send 37.  On account of the ship wreck they said he might be able to get rid of the 40 this week.  Exchanged the dimmer box O.K. but had to get a 35 cent one.  All out of the 25 cent ones.  -- George

Although we don't know the exact details of what George was talking about, clearly his business transaction was affected by the wreck of the Titanic.  What a fascinating view into how the disaster affected many people, some in very humdrum ways!

Oh, WOW! That is just fascinating--what an interesting tangle of events--so connected even today. Amazing. Thank you for sharing this!