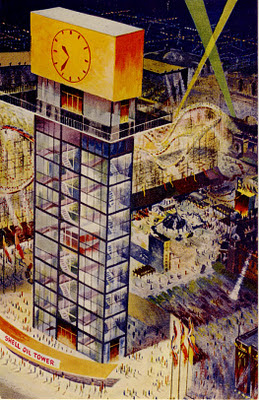 According to the architect George Robb's website (www.gra.ca) the Shell Oil Tower was the result of a 1954 architectural competition for an observation tower at the Canadian National Exhibition. The Tower appeared as a beacon in the night, surrounded by urban floodlights and activity. The Tower glimmered from within, emphasizing it openness, freedom of movement, and purpose as a conspicuously important place in the city.

The Tower was completed in 1955 and served as a landmark for its citizens. It was torn down in 1986. Yet it still holds a place in the history of Toronto as a significant and visionary example of civic architecture. Here's a photograph of the tower at some point in the '60's. Looks better in the illustration on the postcard, dont you think? 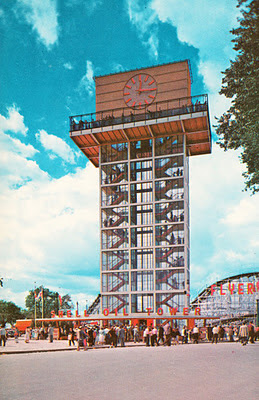 I saw you enter on the PFF hop just before me and thought I would stop by!

Well, thanks for making me discover this tower I never heard about it before, I will ask to my canadians friends about it even if there are from Montreal they'll probably will have some things to say about it.

Happy FPP and hope to read you someday

Its too bad it was torn down. Interesting competition.
Judy

Yes, it's perfect for a postcard. Excellent work for providing a little background.