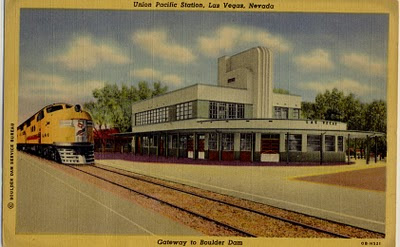 The Las Vegas Union Pacific Station was the best example of Streamline Moderne in Las Vegas. It was built in 1940 and replaced a 30-year-old Spanish-style station. It was demolished in the mid-1960s to build the Union Plaza Hotel. Amtrak continued train service to the back of the hotel until 1993.

The Union Plaza Hotel, now called the Plaza Hotel, announced in September, 2010 that it was closing its 1,037-room hotel tower and will lay off more than 400 employees, in order to make upgrades and re-open in a very difficult economy. The Plaza is the white building in the foreground of this photo: 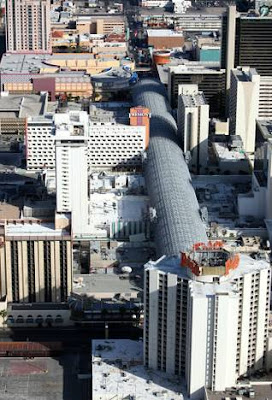 You could hardly believe it's the same place. There must be an untold number of beautiful buildings demolished in the name of progress only to be replaced by soulless blocks of concrete.

That's sad. So many places pulled down. Memories and pictures still exist, thankfully.

The given detail about union station and union hotel. It was renovated in past and now it have all latest facilities.